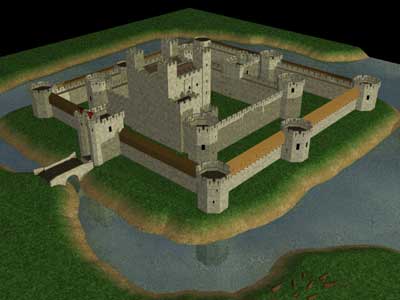 The concentric castle is effectively two castles in one. A concentric castle has an outer wall with a gatehouse as in an ordinary castle, but it also has one or more inner walls with one or more gatehouses. The diagram shown on the left shows an example of a concentric castle. The main gatehouse is shown on the left side of the castle. To gain access to the inner bailey, where the large keep is located, you have to travel the length of the castle to find the gatehouse at the back. An attacking army who managed to get through the first gatehouse would find that they are under attack by the castle's soldiers from all sides as they tried to get around to the other side. Both the inner and outer baileys would have had extra buildings (not shown here) to house soldiers, servants and animals. The Keep at the centre of the castle was the most secure location and this is where the King or Lord would have lived. The inner walls tended to be higher than the outer walls so they could look down and protect them.

Hoardings are shown in the diagram on the upper sections of the outer wall. Hoardings were made of wood and extended out over the edge of the wall. They were designed to give defenders extra protection against missiles, and had arrow loops for the defenders to shoot through. They also had holes in the floor from which things could be dropped onto the attacking soldiers below. 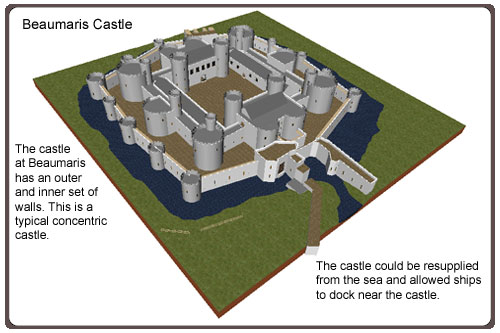 There are the remains of several concentric castles around the country. These include those at Rhuddlan, Harlech and Beaumaris, which is shown below. Rhuddlan, Harlech and Beaumaris castles were all built during the reign of Edward I in North Wales by the master castle builder James of St. George. James understood the importance of the extra protection a concentric castle could provide.

Caerphilly Castle is the earliest of the concentric castles to be built in Britain and is the largest to be built in Wales. Its construction was begun in 1268 by Gilbert de Clare one of the rich marcher lords. During the building work the Welsh made several attempts to destroy it before its completion, but these failed and by 1277 the castle was complete.

Parts of a Concentric Castle 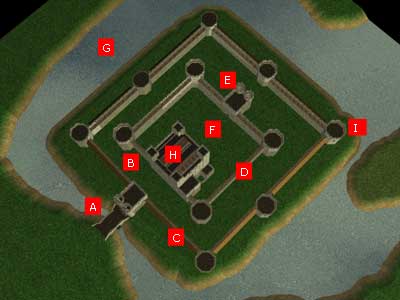 The main entrance of the castle with drawbridge, wooden gates and one or more portculis. The constable of the castle would have quarters here and would check all visiters were who they said they were.

Water filled ditch sometimes with access to the sea.

The King's or Lord's residence. The most secure place in the castle.

A small gate from which the castle's occupants could escape in an emergency.