Religious Life
Please note that the TimeRef website is currently being redesigned.

eligion was important for people in medieval times and was part of the daily life for many of them. Each village had a church and many monasteries were built all across Europe. Kings, Queen and nobles of the time gave donations to the Church in exchange for blessings and for forgiveness for their wrong-doings. The Church looked after the poor and the sick were taken care of in monasteries. Without books and the ability to read, preachers were the only source of information about God and the scriptures. The insides of churches were not white as we see them today but would have been covered in brightly coloured pictures showing stories from the Bible. It was common for people to choose to dedicate their lives to the Church.

Saint Augustine introduced Christianity into southern England in 597 and he introduced the Benedictine Order to the country. Augustine converted the Pagan king Ethelbert to Christianity. Ethelbert gave Augustine an ancient building in Canterbury which had been a church belonging to earlier British Christians built by King Lucius. Augustine restored and rebuilt sections of the church and it became the centre of Christianity in Britain.

Saint Benedict founded several monasteries in Italy in the early sixth century (A.D. 500 ? A.D. 550) including the monastery at Monte Cassino near Naples. Benedict devised a series of rules that had to be followed by his monks. These rules became known as the Benedictine Order. The rules were easy to follow and were adopted in many other countries as well. The monks had to obey three vows; poverty, chastity and obedience. This protected them from the deceits of the World, the lust of the flesh and the snares of the devil. Their day was divided into three parts. The first was devoted to services in the church; the second was devoted to work in the cloisters, reading, writing and meditation; and the third was devoted to manual labour, to help in the gardens or the infirmary. The Benedictine monks were known as the 'Black Monks' because of the colour of their clothing.

What useful purpose did Abbeys perform?

Abbeys were not just a place of worship. They provided many other purposes that were in great demand in the medieval period.

Important documents, charters and even treasures were held securely within the abbeys and to ensure charters could not be lost of accidentally destroyed, copies were sent to abbeys around the country. Documents were important and could prove ownership of land or prove lineage so that titles could be correctly applied. Kings used these records to show that they were the rightful heirs to the throne of England or Scotland for example.

Abbeys were a place of learning and education. Each would have had a person whose job it was to teach. Nobles would send their children to the abbeys to be educated.

Corrodies were sold by the abbeys and were used by nobles to ensure aging servants or poorer family members would be looked after by an abbey. In return, the abbey would provide the person with food and shelter for the rest of their lives. They could also be given roles within the abbey.

An important role of an abbey was to look after the sick. But it also took in travellers in need of rest and food. Some abbeys took this role so seriously that they struggled to afford the amount of food that travellers required. Kings used the abbeys when they travelled around the country and as they were accompanied by many servants would have imposed greatly on the services the abbeys provided.

The economy of the area surrounding the abbey would have benefitted greatly. Trades of all kinds would have been required for the construction and upkeep of the buildings and lands. Farms would have provided food of all kinds. Fairs and markets would have attracted travellers from far and wide.

Layout of a medieval abbey 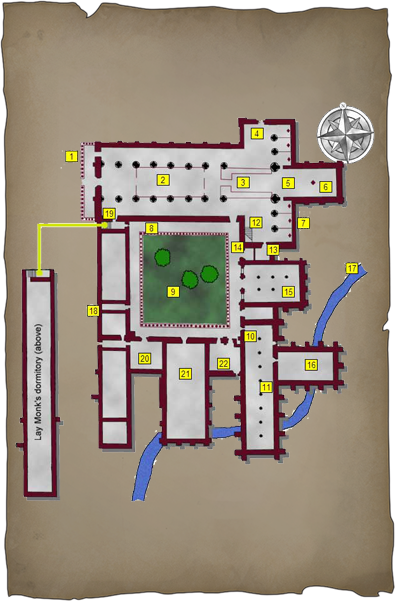 While most monasteries were constructed in quiet, secluded locations far away from villages and towns where the monks could live without the distractions of everyday life, some were built nearer the centres of civilisation. A good water supply was an important factor for the siting of the buildings both for drinking water and for flushing away waste. Surrounding farm land was also a factor and was used for growing crops and grazing sheep. These could be sold to generate income for running the monastery and the upkeep of the buildings.

Benefactors were also an important source of funds for the monastery. Royalty and wealthy individuals donated money to a monastery in exchange for prayers to be said for them. An example is Hailes Abbey which was founded with money from Richard, Earl of Cornwall, who made a promise to found an abbey during a violent storm at sea if he survived.

Ranks within the Abbey or Monastery

The most important person in the Abbey was the Abbot. The abbot was in overall control of the Abbey and monks within it. Junior to the abbot was the Prior. It was the prior's job to organised the day-to-day running of the abbey. In larger organisations there could be a subprior to assist the prior. Other jobs in the abbey were performed by the chantor (singing), the sacristan (general care of the church and buildings), the hospitaller (looking after guests), the infirmarer (caring for the sick) and the almoner (distributing alms to the poor, in other words seeing to the needs of the poor).

For more information about the roles within a monastery, see Monastic Workers

Then, of course, there were the monks.

By the middle of the eleventh century (1040 to 1060) the monasteries in Britain were in decline. They had been the target of repeated attacks from the Vikings and Danes and many of the buildings lay in ruin. After the Norman Conquest in 1066, William the Conqueror granted large amounts of land to the Church and brought Normans over to rebuild and repopulate the monasteries. New churches were built on the foundations of older monasteries and new Norman Benedictine Abbots took over at the head.

Life within the abbey was very orderly and the monks had to follow a strict routine. The monks were woken for the first services at around 1am. The services of Nocturns, Matins and Lauds were performed in the early hours of the morning. After these the monks went back to bed for a few hours sleep. At 7am the monks were awake again for the next services, Prime, Terce and Morrow Mass. After these it was time for breakfast and after they had eaten the monks listened to the lives of martyrs being read and attended to the business needs of the abbey in the Chapter House. At around midday the monks had the main meal of the day. In the afternoon the monks worked in the gardens, tended the animals, looked after the upkeep of the abbey or studied in the cloisters. Between 5pm and 6pm Vespers were performed before supper and then bed at around 7pm or slightly later in the summer months.

The Benedictine Order was not the only monastic order followed during the medieval era. Several new Orders were developed from St. Benedictine's.

The Cistercian Order was created by monks from the abbey at Molesme who were unhappy that the abbey had become too rich and the monks there were not following the Benedictine Order's rules closely enough. They built a new monastery at Citeaux and under the direction of Steven Harding and later St. Bernard of Clairvaux the Cistercian Order became one of the most successful monastic orders. When St. Bernard died in 1153 there were over 350 Cistercian abbeys located across Europe.

The Cistercians were also known as the White Monks because they wore white robes.

Each Cistercian abbey sent out small groups of monks consisting of an abbot and 12 monks to fund new monasteries. The monks would live in temporary wooden huts while they built the new church and proper living accommodation. These new abbeys were called daughter houses and a proportion of money they raised was given back to the parent abbey. This ensured the whole chain of Cistercian abbeys was well funded.

The Cluniac Order was founded by a Benedictine called Odo who believed that the strict rule of St. Benedict was not being followed. He founded the abbey of Cluny in 910. In this order the daughter houses were all dependant on Cluny itself for their funds and any money the daughter house received had to be sent back to Cluny. When Cluny started using its funds to increase its own grandeur its daughter houses suffered and popularity of the order began to wane. Monks in this Order dedicated so much time to prayer that they had to employ workers to tend the fields and gardens.

For information about the other monastic order see Religious Orders

A pilgrimage means to travel to and visit a religious shrine or relic. A person on a pilgrimage was known as a pilgrim. Medieval people used pilgrimages to confirm their faith in their religion. The most important pilgrimages for Christians were to visit Jerusalem and Rome but a pilgrimage to shrines in England were also important, such as Canterbury. The pilgrims went to see the shrines of saints or holy relics such as fragments of the True Cross. The True Cross was the cross that Jesus was crucified on and many religious houses claimed to have a fragment of it. Miracles were reported to occur at the shrines of saints. The sick were supposed to have been cured or the blind made to see again. Having a shrine or relic was very important for a church because pilgrims would come and spend their money in and around the church and leave donations.

The cathedrals we have today were monasteries in medieval times. In each area of the country an important church was chosen to be the home of the bishop for that area. The church in which a bishop has his throne is called a cathedral and the area over which the bishop has religious control is called a See. Norwich and Ely Cathedrals were built by the Normans at the time of the Norman Conquest as monasteries and parts of those early buildings still remain today.

Abbey: The A monastic community. Abbeys belonged to particular orders, such as the Cistercians.
Abbot (male): Person in charge of an Abbey.
Abbess (female): Person in charge of an Abbey.
Almery: or Ambry or Aumbry. A box or cupboard for alms, or a cupboard in the chancel for sacred vessels.
Almonry: The office of the Almoner where alms were distributed.
Benedictine: Order of monks founded by St. Benedict. Followed the Benedictine Rule.
Canons: The chapter members. The people running the cathedral.
Chapter: The group of canons, with the Dean, who are the governing body of a cathedral.
Chapter House: The building where the canons and Dean met each day to hear a chapter of St Benedict's Rule read out and to conduct the business of the abbey.
Cistercians: Order of monks, also know as the White Monks.
Cloister: The rectangular covered area around an open space (garth) of a monastery or cathedral surrounded by covered walkways used for study and meditation. A photograph of the cloister at Lincoln Cathedral.
Minster: Large church originally linked to a monastery.
Monastery: A community were monks or nuns worship God.
Monk: A man who has taken vows and joined a religious community.