Town Life
Please note that the TimeRef website is currently being redesigned.

Life in a Medieval Town

he Anglo-Saxons had developed the fortified settlement known as a burh. The settlement was surrounded by banks and ditches with wooden palisades on top. A number of gatehouses controlled who entered the burh. The buildings inside the burh were mostly made from wood or wattle and daub with thatched rooves. The Old-English word for a settlement was a 'tun' which over time became the word we use today, town.

The number and size of towns started to grow after the Norman Conquest in 1066 but in the medieval period agriculture was the most important job that a person could do. Even those who lived in towns would have worked in the fields around them. At harvest-time other trades would be suspended so that as many hands as possible could gather the crops.

During the eleventh, twelfth and thirteenth centures many new towns were created. These new towns required protection from attack, both internal to the country and from invasion from abroard. 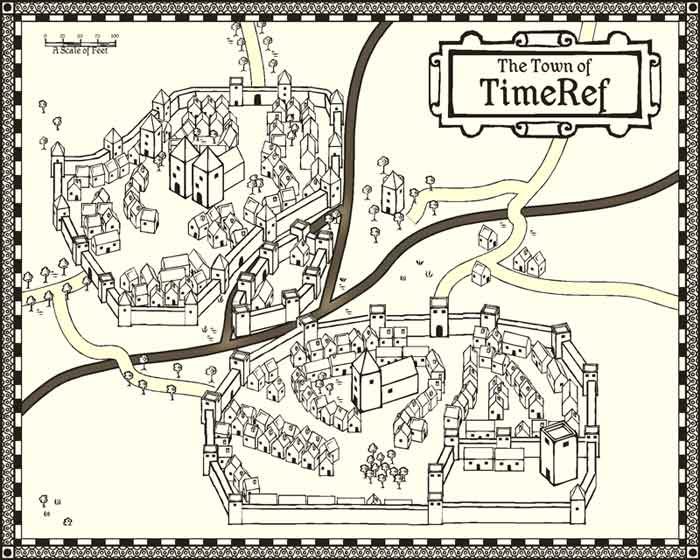 Some medieval towns flourished on the sites of early Roman and Saxon settlements. For example at London, Winchester and Canterbury. Some Romans towns had stone walls that were reused and improved.

Other towns were built on the manors of important lords or around castles and monasteries.

Many towns grew up where there was a natural advantage, e.g. at natural harbours, river crossings and at major crossroads where people could set up shops to sell to passers by. Some of these towns have names that reflect their position such as Cambridge and Oxford where easy river crossings could be controlled.

The houses were all made of wood and tightly packed together. The upper floors of the houses overhung the lower floors. Open spaces were confined to churches and markets.

There was on sanitation in the towns and raw sewage may have run through the streets. They were not healthy places to live.

Deep ditches and strong walls were built around the towns to protect the towns people from attack and as a sign of wealth. Strong gatehouses were constructed at intervals around the walls with drawbridges for extra protection. At night the the drawbridges were raised and the gates were shut.

Both castles and large churches would have provided protection in time of trouble and would have been a source of employment and somewhere to sell goods. Cathedrals and abbeys were also places where pilgrims visited and these people needed places to stay and places to eat. There were plenty of opportunities for work and new occupations to be taken up. Tradesmen moved into the towns to supply the needs of the inhabitants.

Towns had to pay taxes to the king or local lord. Taxes were raised from tradesmen and visitors to the town. Gatehouses made it easy to collect taxes as everyone had to pass through a gate to enter or leave. Taxes had to be paid on all the goods that were to be sold in the markets and fairs. Where the town was next to a river the gatehouses were sometimes built in the middle of the bridges; the river acting as a natural moat.

The large-scale commerce that existed at the time of the Roman Empire was mostly destroyed during between the third century until the start of the eleventh century due to the invasions by the Germanic tribes and later the Vikings, who destroyed many of the trading outposts with their plundering. Commerce began to flourish in the eleventh and twelfth centuries as people began to sell the surplus food and goods they produced for money. Venice became a hub for traders and the coastal regions of Italy took their goods by sea around the caost to France. Markets and fairs were the main way in which medieval people bought and sold goods and these usually took place every week in the towns. Once or twice a year huge fairs were held in the bigger towns. These fairs could last for days and even weeks. The range of goods available was much larger than the local markets and included goods from other countries. Due to the Crusades there was much more interest in foreign goods and merchants from the East were welcomed to sell fine clothes, wines, spices and lace. One of the largest fairs in England was the Stourbridge fair held near Cambridge after the September harvest and could last for five weeks. 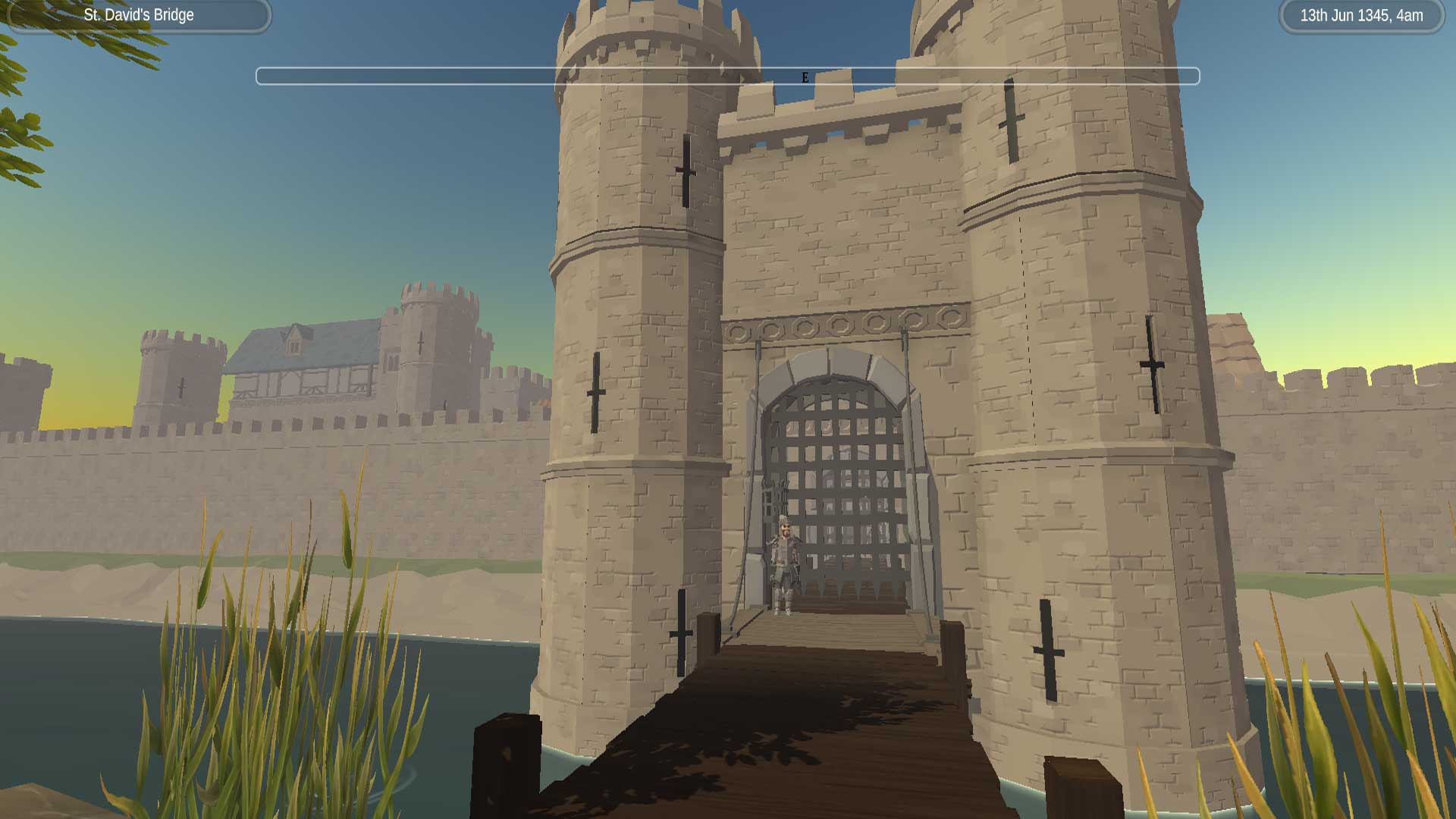 Wooden houses with thatched rooves were a constant fire hazard in medieval towns. In 1135/6 a fire that started on London Bridge spread across a large part of the city of London damaging St. Paul's Cathedral. In 1189 a law was passed called the London Assize in response. To protect the buildings from fire the law stated that the lower floor of new houses must be built from stone and the roofs should be tiled. The quality of the stonework and tiles depended on the wealth of the owner, but it was hoped that this measure would put an end to the destruction.

In the towns traders and merchants formed guilds. The members of the guilds helped protect each others interests and also control quality ensuring all the members did work to a suitable standard. Over time separate guilds were created for each type of trade and it was common for all shops selling one type of product to be located in the same area of the town. The idea of selling one kind of product in one area still happens today. Some cities have jewellery quarters for example.

Henry II recognised the powers of the guilds and wanted his share of their wealth. Henry claimed that every guild had to be licensed and pay a tax straight to the King. Any guild that was not licensed was fined.

Members of the guilds paid a membership fee and the guilds became powerful and wealthy. Some guilds built their own meeting places call guildhalls where meetings and banquets took place. Guilds also helped their members if they fell ill and looked after their family after they died. Guilds used their wealth to put on plays called mystery plays that were based on stories from the Bible. The word mystery is probably a mispronunciation of a medieval word for guild or craftsmen.

Transporting goods by land meant paying duties for using roads, fords and bridges. Each required some kind of payment and caused delays. Payments may have included giving up the best produce leaving only the damaged to continue.

Roads were of poor quality even the Roman roads and bridges were not common.

Transporting goods by sea was even more hazadous. Pirates were common and without the lighthouses we have today it was common for ships to run aground and get stranded. The goods of stranded ships could be claimed by the owner of the land that bordered the sea where they ran aground.

Guilds for the clothing and leather industry

Guilds for the food and wine industry

Guilds for construction, metals and jewelry

Sewers and toilets as we know them today did not exist in medieval times. Some households had toilets that emptied directly into a stream but most people did not have this luxury. A chamber pot was used by the household and then emptied directly out onto the street in front of the house. At times it was easier to empty the waste from the upper floors giving some warning to those below to keep clear. Laws were passed to ensure people did not pollute neighbours property and to clear up the mess. Many towns had a ditch used as a sewer and was filled not only with human waste but also the stinking waste that was the result of the butchers and tanners making leather. The town ditches were designed so that they emptied into a river when it rained so that the waste was washed away.

Manor: The land owned by a lord and occupied by dependent farmers.
Demense: Lord of Manor's own land.
Villeins: Villagers who were owned by the Lord of the Manor and could not leave..
Hide: An area of land about 120 acres in size.
Caracute: Another name for a hide.
Hundred: Enough land to support a hundred homes.
Freemen: Villagers who were free to leave the village.
Cottars: The poorest villagers.
Reeve: Villager elected to representative the villagers.
Hayward: Villager ensuring aminals did not stray.
Dovecote: Building where pigeons and doved were raised.