Cathedrals
Cathedrals
Please note that the TimeRef website is currently being redesigned.

he main difference between a cathedral and a large church is the presence of the throne of a bishop. The word cathedral derives from the Latin and originally Greek word cathedra, meaning a chair or throne. The diocese of which the bishop overlooks is called a see and is named after the city in which he sits. In other countries cathedrals are not always built on a large scale, but in England cathedrals have centred around large dioceses and attracted large legacies and other riches allowing the buildings to grow in size and splendour.

Many cathedrals are built on earlier sacred sites where saints have been buried. Sadly many of the cathedrals that were founded before 1066 have very little of the early buildings still standing, except in some cases where the crypts have survived. Those that were founded before 1066 include Canterbury in 597, York in 625, Lichfield in 656, Hereford in 676 and Worcester in 680. The list of those buildings that are defined as cathedrals has changed over time. In 1066 the list of cathedrals were, Canterbury, York, London, Rochester, Lichfield, Winchester, Hereford, Worcester, Wells, Durham, Exeter, Elmham (Norfolk), Dorchester (Oxfordshire), Sherborne (Dorset) and Selsey (Sussex).

The cathedrals before the Norman Conquest were probably much smaller in size compared to what we see now. The Normans brought their building skills with them and shortly after the Conquest many of the cathedrals were being rebuilt. 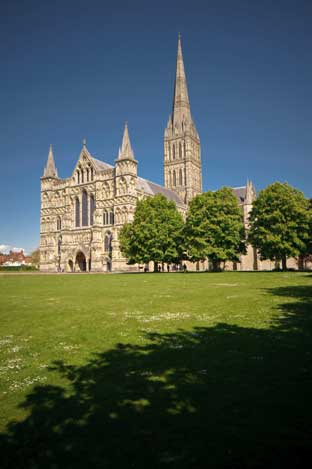 From medieval times through to the modern day the Church has inspired people to visit religious sites. These included taking the long journey to Rome or further to the Holy Land and Jerusalem. The people who undertook such journeys are called Pilgrims. For those pilgrims who could not travel such large distances cathedrals and abbeys served the same purpose. By containing the remains of important religious people and the relics of saints they became the focus of pilgrimages. Especially if miracles took place. It was thought that the sick could be cured by visiting the site where these remains were held.

It was important for a cathedral to be a place of pilgrimage as pilgrims visting the cathedral would donate money.