Who were the Saxons and Angles?

he Saxons, Angles, Jutes and Frisians were tribes of Germanic people who originally came from the area of current northern Germany and Denmark. These tribes invaded Britain during the Roman occupation and again once it had ended. They settled in areas of the south and east of the country. Over time the Jutes and Frisians were either driven out of the country or merged with the Saxons and Angles.

Most of what is known of these invaders comes from just a few sources. The Ruin of Britain was written by a British monk called Gildas in the 540s. Another monk, known as the Venerable Bede, from Northumbria, compiled the Ecclesiastical History of the English People in 731. More recently documents were written known as the Anglo-Saxon Chronicles. These documents were compiled over the centuries, sometimes many years after the events that they describe. Written in Old (Saxon) English, the documents were updated and copied by monks of the Church. Less than ten chronicles now exist and none are the originals. They are all copies that were created during and after the time of Alfred the Great. They detail the individual events that occurred year by year. Because the chronicles were copied by hand, there are minor differences between them.

Routes taken by the Jutes, Angles, Saxons and Frisians.

Where did they settle?

While the Romans were present in Britain they were able to keep the Picts in the north and Scots in the West at bay, but when the Romans left Britain in 410 the native Britons faced attacks from both. The Chronicle tells of a ruler of the Britons called Vortigern, a warlord who may have ruled Britain after the Romans departed.

In 449 AD (the dates are an approximation), the Chronicle says, two brothers of the Jutish tribe, Hengist and Horsa, were employed as mercenaries by Vortigern to help defend the lands against attacks from the Picts and Scots. Vortigern gave the bothers the Isle of Thanet, the most easterly point of Kent. At this time it was cut off from the mainland by a strip of water but now it is no longer an island.

Once the Picts' and Scots' attacks had been halted the brothers refused to leave and sent back word to their homeland of the rich and fertile lands in Kent that they now occupied. Many years of war between the Britons and invading Jutes then took place as the Jutes secured lands in Kent. A later account of these events mention the daughter of Hengist called Rowena (Rowena) who married Vortigern and secured Kent for the Saxons through marriage.

The area of South Sussex became the target for a Saxon invasion in 477 when Aella and his three sons Cymen, Wlencing and Cissa landed in Britain. At this time the Weald forest lay to the north of the coast and formed a barrier to the midlands and northern Britain. In 491 Aella attacked Anderida the largest town in the area, now the location of Pevensey Castle, and killed all the Britons there.

This map shows how Britain was organised in around 550 AD

The third noted invasion by the Chronicle is that of the Saxon Cerdic and his son Cynric in 495. They landed in the south where Southampton is now and moved north into Hampshire and Wiltshire. This region became known as West Sussex.

In around 547 an Angle called Ida landed on the north-east coast of Britain and and created a base at Bamburgh (or Bamborough). According to the Chronicle he reigned for twelve years and founded the kingdom of Northumbria.

The foundation of the other Anglo-Saxon states of the East Angles, East Saxons, Middle Saxons, Middle Angles or Mercians is not mentioned in the Chronicle.

Between the years 500 and 550 the Saxon invasion seems to have been halted. In 516 at the Battle of Mons Badonicus, the Saxons were defeated and a period of relative peace fell across Britain for some 50 years. It is around this time that later accounts of the period tell of a British leader and a warrior who may have been the 'real' King Arthur.

The progress of Saxon invasions only continued in around 550 when the ruler of the West Saxons, Cynric, managed to defeat the British in Wiltshire and his son Ceawlin took the areas around Bath and Gloucester in 577 after defeating the Britons at Deorham. Ceawlin became leader of the West Saxons in around 560 after the death of Cynric and he reigned for more than 30 years, fighting many battles during his lifetime. He is known as a Bretwalda, or form of high king, due to his importance at this time. After the Battle of Deorham both Wiltshire and Somerset became part of his kingdom. In 584 Ceawlin defeated the Britons at Fethanlea(g) but his ally/brother Cuthwulf was killed. Ceawlin's reign came to an end in 588 possibly due to a revolt by some of his own people. Ceol(ric) became the ruler of the West Saxons.

What became of the native Britons?

At this time Scotland was inhabited by the Picts with settlers from Ireland on the west coast. The Saxons had landed on the east coast of Britain and as they moved further west they forced the native Britons into Wales and the south-west of Britain, Cornwall, Devon and Somerset. This area was known as Dumnonia.

In Kent the bretwalda was Athebert (I). He ruled over several kingdoms from around 580 until his death in 616. He was the first Saxon ruler to be converted to Christianity. Pope Gregory had heard of Britain after seeing fair-haired slaves in a market when he was younger and had enquired about their homeland. When he discovered they were pagan he had saught permission to travel to Britain to convert the population to Christianity. He was not given the permission he required and so stayed in Rome. He did not forget his desire to travel to Britain and later after becoming Pope he despatched a missionary group to go in his place. In 596 the group of missionaries, led by a priest called Augustine, set off on the hazardous journey to Britain. In early 597 they arrived on the Isle of Thanet and were met by Athelbert a few days later.

Athelbert's wife Bertha was a Christian and a condition of their marriage was to allow her to continue to practice her religion and her chaplain, Luidhard, was allowed to accompany her. Together they restored St. Martin's in Canterbury an old Roman church. When Athelbert met with Augustine it was done in the open-air as the Saxon king was suspicious of Christian magic, but within the year Athelbert was converted to Christianity and the priest was given permission to stay and worship at St. Martin's in Canterbury. In 601 a letter from the Pope allowed Augustine to become archbishop of Canterbury.

Within a few years Christianity began to spread as other priests arrived from Rome to set up sees and preach, including Justus in Rochester and Mellitus in London. But after the death of Augustine and the succession of new Saxon rulers who had not been baptised as their parents had, Christianity came under attack as people returned to their pagan beliefs. Both bishops Justus and Mellitus were exiled and fled across the English Channel. The change was led by Eadbald, the son of Athelbert who married his father's young second wife and his stepmother. Eadbald suffered from bouts of madness and because this was attributed to his pagan beliefs he recalled Bishop Justus from exile and was baptised. Mellitus was also recalled but was unable to return to London and became Archbishop of Canterbury.

Christianity arrived in Anglo-Saxon Britain not only from Rome but also from Ireland. The Celtic Church was founded on the island of Iona by St Columba in 565. The two existed side-by-side until a synod at Whitby in 664 where King Oswiu of Northumbria case the deciding vote in favour of Rome.

This picture shows the seven main states that existed in Anglo-Saxon times.

Each separate state had a king and council known as a witan which advised the king. The witan was made up from important nobles of the state. Like the Britons before them the Anglo-Saxons fourght amongst themselves. When an Anglo-Saxon king defeated the king of another state, the conquered state was either completely taken over or remained independant but had to pay a fee to remain so.

During the hundreds of years of the Early Middle Ages the states were fought over many times. Several times during those many years a king came to power with the strength of conquer the majority of the other states and become the ruler of England. These overlords were known as Bretwalda and the Anglo-Saxon Chronicle mentions several Saxon rulers who were powerful enough to control the other states.

As the Chronicle was biased towards Northumbria and Wessex it does not mention the Mercian kings who could also have had this title applied. These include Aethelbard, Offa and Cenwulf.

Test your knowledge on the Saxons and Angles

449 - Hengist and Horsa arrive in Britain

Two brothers of the Jutish tribe, Hengist and Horsa, were employed as mercenaries by Vortigern to help defend the lands against attacks from the Picts and Scots.

According to the Anglo-Saxon Chronicles this major battle fought between the native Britons and the invading Anglo-Saxons resulted in a major victory for the Britons and stopped the invaders moving further west. Also known as the Battle of Badon Hill, this event is linked to the mysterious figure King Arthur.

The ruler of the West Saxons, Ceawlin, defeats the British and takes control of Wiltshire and Somerset.

A group of missionaries led by the priest Augustine was sent by Pope Gregory to convert the pagans of Britain to Christianity. They landed on the Isle of Thanet in 597 and met Athelbert, the ruler of Kent, who was converted.

The Northumbrian Christian king Oswald was defeated at the battle of Maserfield by the pagen king Penda of Mercia. After the battle Penda had Oswald's body dismembered and stuck on a tree. The theory is that from this event the town of Oswestry got its name.

King Oswy of Northumbria was a follower of Celtic Christianity. When he married the daughter of King Edwin she brought with her the Roman Chistian tradition. The conflicts between the two traditions led to a meeting at Whitby where a new monastery had been recently founded. After several days of discussion the King chose to adopt the Roman traditions.

Theodore of Tarsus arrived in England to become the new Archbishop of Canterbury. Under Theodore's leadship the structure of the English Church was changed. Lands were donated and new dioceses were created. Before this time bishops had a monastery but had no defined areas of their own and were missionaries. It was at around this time that the rule of St. Benedict was introduced into the country.

A bishop called Benedict Biscop, originally coming from Northumbria, had accompanied Theodore of Canterbury from Rome. Under Biscop's guidance the twin monasteries at Wearmouth and Jarrow for monks and nuns was founded. The monasteries became an important centre for learning and Biscop made several journeys to Rome to bring back books for the libraries at his monasteries. One of Biscop's pupils was Bede who was one of the most important scholar of his time. Bede wrote the Ecclesiastical History of the English People. This work detailed the history of the Anglo-Saxon people and has given us an understanding of the times that he lived in. 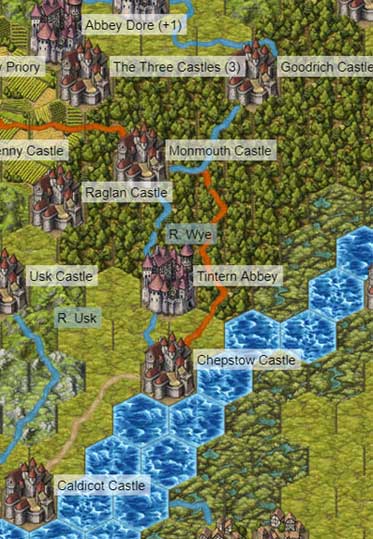