When Edward the Confessor died on January 4th 1066 he did so without leaving a son or daughter to become the new King or Queen of England. The three claimants who fought to take control of the throne of England were: -

Harold, Earl of Wessex was elected King of England after Edward the Confessor had died in 1066 without leaving a son or daughter who could take his place on the English throne. Edward's death started a fight over the English throne and this lead to the invasion of Britain by Harald Hardrada and William the Conqueror. Harold defeated Harald Hardrada at the Battle of Stamford Bridge but was killed at the Battle of Hastings.

Harald Hardrada was the King of Norway and invaded England in 1066. He had a weak claim to the English throne through his family links with King Canute, a previous King of England. Harald was killed at the Battle of Stamford Bridge in Yorkshire.

Tostig was the Earl of Northumbria and the brother of Harold, King of England. Tostig was not a popular leader and had to escape to Flanders when the Northumbrian people rose up against him. Together with Harald Hardrada Tostig invaded England in 1066.

William the Conqueror was the Duke of Normandy. William had a claim to the English throne and when Edward the Confessor died in 1066 he invaded England to take the English crown.

Harold as King of England

When Edward the Confessor died the rightful heir to the English throne was Edgar the Aethling. Edgar was Edward's grand-nephew and the grandson of Edmund Ironside. Edgar was a young boy and had only recently returned from Hungary where his father had been banished by Canute. As Edgar had no experience of the English customs and was too young to rule the English noblemen chose Harold Earl of Wessex as their next King. Harold was an Englishman and had fought against the Vikings. Harold became King of England on January 6th, 1066.

Harold had travelled to Normandy and visited William the Conqueror in 1064. At a mysterious meeting it is suspected that Harold agreed that William had a claim to the English throne and should become King of England when Edward the Confessor died. As soon as Harold was crowned messengers left England and sailed to Normandy to tell William the news. When William learnt that Harold had taken the English throne he was outraged and began invasion plans.

Invasion by Tostig and Harald Hardrada, King of Norway

Tostig was the brother of King Harold and had been the Earl of Northumbria until the Northumbrians revolted against him. Tostig went into exile to Flanders but in May of 1066 he invaded southern England with a sizable invasion fleet. His invasion plans failed and he sailed north, first to Scotland and then to Norway and the court of Harald Hardrada. Tostig persuaded Harald Hardrada to assist him invade England. In September 1066 Harald and Tostig along with a large invasion fleet sailed up the River Humber and headed for York. On September 20th at Gate Fulford just a couple of miles south of York the English, lead by Earls Edwin and Morcar, fought the invaders. The English were defeated by the invaders. During the summer of 1066 King Harold had been preparing for the invasion of William of Normandy. William had been building up a large invasion fleet in Normandy and it was only a matter of time before he sailed across the English Channel. Harold's army was on the south coast and when Earls Edwin and Morcar were killed at Gate Fulford Harold had no choice but to march his army north to deal with the invasion of Tostig and Harald Hardrada. The armies met on September 25th at Stamford Bridge just a few miles to the east of York in Yorkshire. King Harold won the battle where both Tostig and Harald Haradrada were killed.

How William of Normandy won the English throne

At about the same time that King Harold was dealing with the invasion in the north, William had set sail from Normandy. William's fleet landed at Pevensey on the south coast of England on September 27th and his army moved up the coast to Hastings where temporary fortifications were built. It is possible that William's army brought wooden castles in pieces with them that they could rebuild in England.

On October 1st King Harold heard news of William's arrival and immediately began the long journey south with his army. By October 6th Harold had reached London where his army rested. On October 11th Harold and his army left London to fight William. This diagram shows the route that William and his army took from Pevensey, where they landed, to London. A direct route to London was not possible so William had to circle the city and enter from the north. 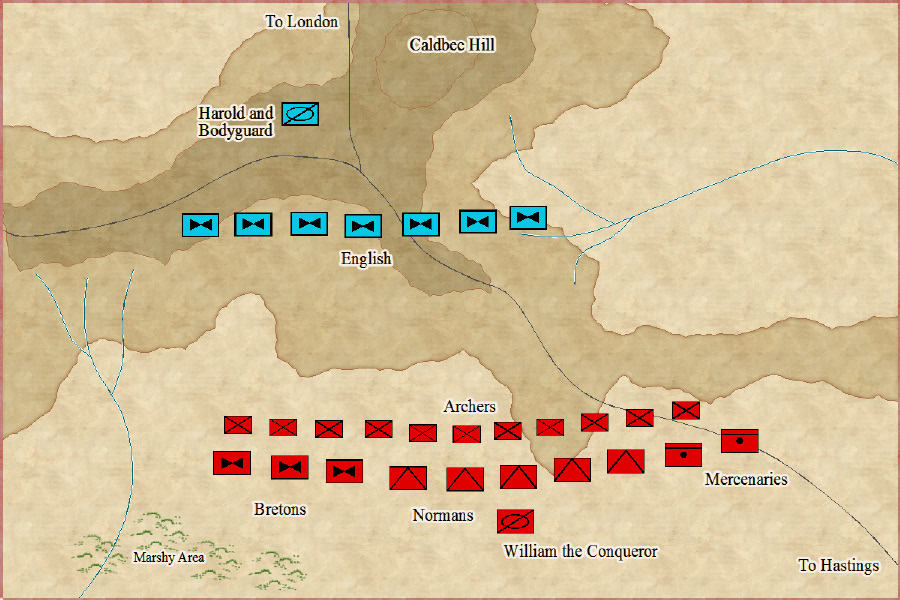 The Norman and English armies met at Senlac Hill near Hastings on October 14th. After the battle King Harold was dead and William the Conqueror and his army had won. William refused to allow Harold's body to have a proper burial and the body was moved to the beach where it was put under rocks. The Normans waited expecting representatives of the Saxons to approach and submit to William's rule but none came.

Here is a detailed account of the Battle of Hastings

Securing England after the battle

William marched his army along the south coast of England to capture the key ports which he needed to control if more men and supplies were to be sent from Normandy. The ports and castles at Dover and Romney fell easily to William. After a stay at Dover and resupplying his men, William moved north to Canterbury which again submitted to his control.

William met little resistance as he moved around southern England, but his army was repulsed to the south of London as he tried to enter the city. William had to march his army around to the north looking for suitable river crossing points. As he did so he laid waste to the land depriving the Londoners of their supplies. William crossed the Thames at Wallingford and at Berkhamsted he was met by a peace delegation including Edgar the Aetheling, Aldred of York, Wulfstan bishop of Worcester, Walter bishop of Hereford several other high ranking Earls who accepted William as their new King.

William the Conqueror was crowned King of England on December 25th 1066, Christmas Day, at Westminster Abbey in London, but William's control of England was not complete. In the following years he had to deal with several uprisings against him.

Now test your knowledge of the Norman Invasion

Edward the Confessor died at Westminster. The death of Edward was an important event in the chain of events that led up to the invasion by William the Conqueror from Normandy.
Jan 6

After the death of King Edward Harold Godwinson was chosen as king but his reign was not to last very long.
Apr

A comet appeared in the skies and is shown on the Bayeux Tapestry. It is thought to be the same comet that was named after Edmund Halley who accurately predicted its return in 1758.
May

After being expelled from Northumbria Tostig spent time in Flanders. Here he raised an army and fleet and attempted to invade the south of England. The English armies around the Isle of Wight were too strong so Tostig was forced to look for another place to attack. His fleet sailed up the east coast of England to Lincolnshire. ¹
Jun

William the Conqueror and Matilda attended the dedication of Matilda's church, the Holy Trinity at Caen. To show their devotion they gave their daughter Cecilia to the church to be raised as a nun. ¹
Jul

William's Invasion fleet gather in the estuary of the River Dives

William the Conqueror made preparations to invade England. His invasion fleet gathered in the estuary of the River Dives and other ports in Normandy. ¹
Jul

King Harold gathered an army and waited on the south coast of England to defend the country against William's invasion.
Sep 12

William the Conqueror's invasion fleet arrived at St-Valery-Sur-Somme further up the Normandy coast. William had either decided to move the fleet to the inlet or the fleet was forced to take shelter there after being hit by a storm. William's fleet remained there waiting for winds blowing in the right direction to take them to England.
Sep 20

Harold Hardrada's forces invaded England and started ravaging the countryside as they made their way to York. English forces led by Earl Edwin and Earl Morcar battled with Harold Hardrada at Gate Fulford, but the English were severely beaten. Following this defeat King Harold was forced to march his army away from the south coast where they were preparing to defend against William the Conqueror's invasion to deal with the invasion in the north.
Sep 25

King Harold defeated the invasion threat from Harold Hardrada, King of Norway and his own brother Tostig, both of whom were killed. This stretched his forces to the limit as they quickly had to march south to defend against William the Conqueror's invasion from Normandy.
Sep 27

Just after dawn the main part of William's fleet landed on the English coast at Pevensey while some split from the main group and came ashore at Romney.
Oct

William the Conqueror moved his army to Hastings. The village of Hastings in 1066 was on a peninsula of land with marsh and water on two sides. The area was a natural defensive site with a hill to the north that could be used as a lookout point. William possibly built extra defences at Hastings while he prepared to move towards London.
Oct 1

King Harold was resting his army in York when he learnt that William had landed on the south coast.
Oct 6

King Harold had to march south from Stamford Bridge to counter the threat of invasion from William the Conqueror.
Oct 11

King Harold left London with an army and headed for the south coast.
Oct 13

King Harold and his army reached Caldbec Hill near the road from London to Hastings. Here they prepared for the battle to come. ¹
Nov (to Dec)

After his victory at the battle of Hastings William moved along the south coast to Dover where extra fortifications were built in the existing castle at the top of the cliffs. From there he moved on to Canterbury. After the death of King Harold the archbishops of York and Canterbury, Ealdred and Stigand supported the plan to put Edgar the Atheling on the English throne but William moved too quickly for this to be done and Edgar was too young and inexperienced to take on the role. Canterbury submitted to William and he moved on to London. Instead of entering London from the south he moved around the west of the city crossing the Thames at Wallingford. Finally archbishop Stigand and the other Anglo-Saxon leaders submitted to William and after turning south at Little Berkhamsted William the Conqueror entered London.