Edward I and Wales

lewelyn ap Gruffydd was the Prince of Wales. He was accepted as the ruler of the Welsh and when King Edward became King of England he expected the Prince to pay homage and accept Edward as his overlord. According to the Treaty of Shrewsbury Llewelyn had to pay the English crown a sum of money each year for the privilege of ruling the Welsh people. Since the death of Edward's father, Henry III, the payments had stopped. Edward sent for Llewelyn several times but the Welsh Prince failed to respond. Llewelyn further annoyed King Edward by arranging for Eleanor de Montfort, who had been promised to him as a bride for his support of Henry III in the Baronial revolt against the barons, to come from France.

The war with the Welsh begins

In 1276 Edward declared war on the Welsh Prince. Edward's ships managed to intercept Eleanor de Montfort en-route from France. The bride-to-be was captured and brought to England and imprisoned. Edward hoped that Llewelyn would back down to have Eleanor released but he refused. In the south and central areas of Wales the Welsh quickly abandoned their allegiance to Llewelyn and the Marcher Lords who had castles on the English-Welsh border areas took control. The only areas Llewelyn had control over were the northern areas of Wales.

Castle building, the key to success 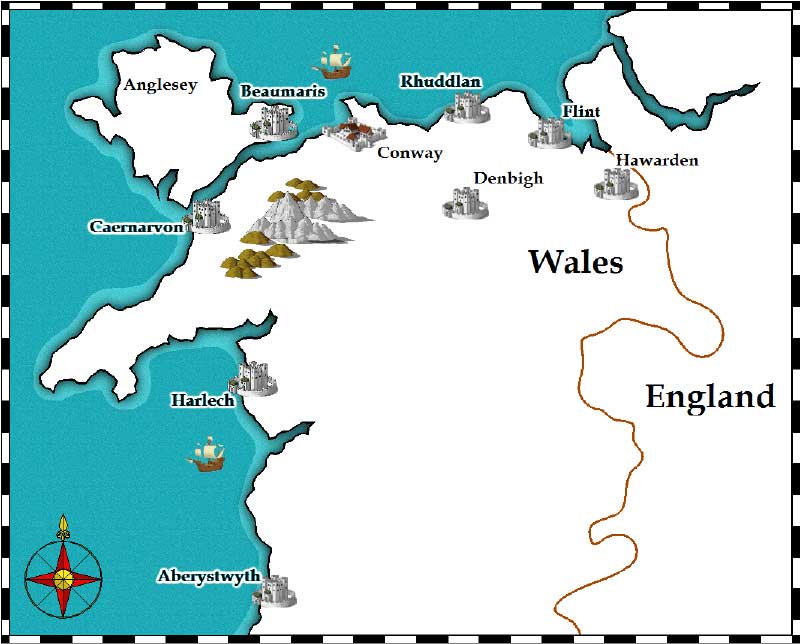 The Welsh fighters had the advantage in northern parts of Wales as they knew the land that they were fighting in. The English, on the other hand, were at a disadvantage as they had to rely on supplies being transported through enemy territory from England. Invaders of Wales had always found it hard to subdue the Welsh because it was easy for the Welsh to use the mountainous terrain to cut off attacking armies from their supplies.

To solve the supply problem Edward built a series of castles along the north coast of Wales where they could easily be resupplied from the sea. Edward employed the castle building skills of a man known as James of St. George. Flint Castle in Clwyd was begun in 1277 and was one of the first castles to be constructed. Rhuddlan Castle was started shortly afterwards. The design of these castles was based on fortifications Edward had seen on his travels in France and consisted of a strong castle attached to a town enclosed by a strong wall. The towns were populated with English traders who could supply the army and start trading with the local Welsh people.

Llewelyn defeated but the war flares up again

By the end of 1277 Llewelyn had been defeated by the English. The Welsh Prince accepted King Edward as his overlord and was allowed to marry Eleanor de Montfort. At Christmas that year Llewelyn visited Edward at the English court to pay homage to the king. Llewelyn had been subdued but not for long. In 1282 the Welsh Prince and his brother David rose up in revolt against the English. The English suffered a serious defeat while attempting to cross the Menai Straits from Anglesey to North Wales. The Welsh were waiting for the English and many of the English knights drowned when the boat bridge that they were crossing on was destroyed.

Whilst fighting in the south of Wales Llewelyn was killed. He had moved to the rear of his army feeling secure with the way the war was progressing. A detachment of English found a way across the River Wye which Llewelyn was using for protection and moved around the rear of the Welsh army where the Prince was resting. Before Llewelyn could rejoin his army he was cut down and killed. His head was cut off and taken to King Edward. David was captured six months later and executed.

A new Prince of Wales

Edward arranged a 'Round Table' event and tournament at Nefyn in Wales where he promised the Welsh that he would provide them with a Prince of Wales. In the same year Edward (II) was born who was invested as the Prince of Wales in February 1301.After the second Welsh rebellion Edward decided to bring Wales under direct rule. The Statute of Rhuddlan brought English laws to Wales. Edward appointed sheriffs and bailiffs for the northern territories while the southern areas were left under the control of the Marcher Lords.

Revolt of Llywelyn of Wales

Llywelyn ap Gruffydd of Wales had consistently failed to do homage to King Edward I. He had been paying sums of money to the English crown as agreed in the Treaty of Shrewsbury drawn up in 1267 but after the death of Henry III the payments had stopped. Edward's repeated demands for a meeting with Llywelyn were ignored. In an attempt to stir up internal problems in England Llywelyn sent to France for Eleanor de Montfort who had been promised to him as a bride for his support of Henry III in the Baronial revolt against the English King. Eleanor was captured by the English on the journey and was then held prisoner by Edward. Edward finally had to accept Llywelyn as a rebel and so began his war on the Welsh. Feudal levies were called for in June 1277 allowing an army to be raised via the feudal system to supports the King's war with the Welsh.

Edward's war with the Welsh begins

Before the main army could be assembled Edward ordered that the Marchers and the smaller permanent forces attached to the royal household were to be sent out in three detachments. Although not much headway was made in the north the south and central districts abandoned their allegiance to Llywelyn. Roger Mortimer was able to force Llywelyn to retreat from Powys northwards. It was soon clear that the only area the Llywelyn had any control over was the north of Wales.

King Edward I ordered improvements to be made to the castle at Builth.
Jun

Edward I called for feudal levies to be collected to pay for his war against the Welsh prince who had repeatedly refused to pay him homage.
Jul

As part of the plans to defeat Llywelyn Edward I ordered the construction of Flint Castle in Clwyd. Edward had been impressed by fortified town and castle combinations he had seen on his travels in France and Flint Castle was designed in the same manor. The castle was completed in 1280.
Jul

Joined by a force of some 800 cavalry and 2500 infantry at Worcester, King Edward I moved north to Chester. Edward's forces then proceeded to move along the north coast of Wales. His advance was impeded by dense forest which offered the Welsh good opportunities to launch surprise attacks on the English troops. Edward built a wide road through the forests building fortified posts along the way. The force of soldiers were on a forty-days service agreement and after that some returned home. Edward retained some by paying them extra for their services.
Aug

Leaving work on Flint Castle underway Edward I moved on up the coast to Rhuddlan where he found the remains of an old Norman Motte and Bailey castle overlooking an important crossing point of the river Clywd. A new castle was ordered and work began to create both the castle and a new town alongside.
Nov 10

Llywelyn was cut off from supplies and an escape route so had to accept defeat. Edward demanded payment of £50,000 and all of Llywelyn's territories. Llywelyn was left only with the Isle of Anglesey which he had to pay rent of £1,000 a year. Edward also demanded that Anglesey should be handed over if Llywelyn died without a male heir. Llywelyn swore fealty to Edward at Rhuddlan on November 10th and again at a ceremony at Westminster Abbey on Christmas Day.

With peace between Edward and Llywelyn, the marriage between Llywelyn and Eleanor de Montfort was allowed to continue. The marriage took place at Worcester and was attended by Edward.

The Welsh attacked and burnt the castle at Aberystwyth and its town.
Mar

Hawarden Castle captured by the Welsh

David ap Gruffydd attacked and took control the castle at Hawarden. The constable, Roger de Clifford, was captured during the attack.
Easter

David, Llywelyn's brother, rose up in revolt. Llywelyn, even though he had sworn fealty to Edward, joined his brother in the fight against the English.
Aug

King Edward had called for the feudal army to gather at Rhuddlan in August to put down the Welsh revolt. Edward and Eleanor's daughter Elizabeth was born at Rhuddlan at this time.
Nov 6

Luke de Tany, on the side of the English, had taken control of Anglesey. The plan was attack the Welsh rebels from the north and so a bridge of boats was constructed across the Menai Straits that separate Anglesey from Wales. The Welsh were waiting for the English in force and the English plan failed. Many of the English knights drowned when the boat bridge was destroyed.
Dec 11

Whilst fighting in the south of Wales Llywelyn was killed. He had moved to the rear of his army feeling secure with the way the war was progressing. A detachment of English found a way across the river Wye which Llywelyn was using for protection and moved around the rear of the Welsh army where the Prince was. Before Llywelyn could rejoin his army he was cut down and killed. His head was cut off and taken to the King Edward. Llywelyn's brother David carried on the fight against the English for another six months.

After capturing Dolwyddelan, Edward moved up the river Conwy to its mouth and a new castle was ordered. The castle's design and size were chosen to prove the royal power of the English King. Construction work lasted until 1297.
...

Edward and his master castle builder started the reconstruction of a new castle at Caernarvon.
Jan

After the death of Lleweyln Edward was free to occupy all the previous strongholds of the Welsh Princes. In 1283 Edward attacked and captured the Welsh castle at Dolyyddlan.
Mar

Edward moved around the Welsh coast to attack and capture the Welsh castle at Criccieth. He then moved on and ordered another castle to be built at Harlech. In the summer of 1283 King Edward provided money to improved the defences at Criccieth Castle.
May

Work began on Harlech Castle. Money for the construction being moved from Cymer Abbey a few miles to the south of the new castle's location.
Jun

David the brother of Llywelyn was handed over to the king by his own supporters who had already surrendered. He was taken to Shrewsbury Castle where a Parliament met and sentenced him to death by execution.
Oct 3

Dafydd was found guilty of high treason and sentenced to death. His punishment for betraying the King was to be drawn, hanged and quartered.

'Round Table' event in Nefyn

King Edward I arranged a 'Round Table' event and tournament at Nefyn in Wales. He promised the Welsh that he would provide them with a Prince of Wales. This he did as in 1284. Edward, the future King Edward II of England, was born. The young prince would be invested as the Prince of Wales in February 1301.
Mar

After the second Welsh rebellion Edward decided to bring Wales under direct rule. The Statute of Rhuddlan brought English laws to Wales. Edward appointed sheriffs and bailiffs for the northern territories while the southern areas were left under the control of the Marcher Lords.
Apr 25