arkworth Castle is located to the south of the village of Warkworth in Northumberland. During the early medieval period the castle was owned by the Percy family. The Percy family was a powerful land owner who also owned the larger Alnwick Castle a few miles to the north. The third Earl was created the Earl of Northumberland and was a key player in the conflicts against King Henry IV during the revolt of Owain Glyndwr. The village of Warkworth is situated in a bend of the River Coquet and the motte and bailey castle occupys a strong defensive position on high ground. To the west of the castle is a steep drop but to the east the ground slopes more gradually. Positioned where it is the only easy access to the castle is from the south. This approach is defended by a ditch and a curtain wall with a strong gatehouse. The keep of Warkworth castle is situated on the motte on the north side of the bailey.

The southern curtain wall has two towers; the Carrickfergus tower to the west and the Montagu tower to the east. The curtain wall and the main gatehouse were probably built at the turn of the thirteenth century. Access to the gatehouse is across the ditch which originally would have been protected by a drawbridge. The central passage of the gatehouse posed a particular problem for any attacker as it not only has a gate and a portcullis but also has guard rooms on each side with arrow slits. Another gate at the far end of the passage added yet another obstacle to be overcome.

Once through the gatehouse you enter the bailey. The bailey is split into two wards by the foundations of a half-finished church. The outer ward is the larger of the two wards and around its edge are the remains of several buildings that would have stood against the curtain walls. In the south west corner of the outer ward are the remains of a chapel and domestic buildings. The main hall would have stood against the west curtain wall along with the kitchen. The only surviving parts of this range of buildings are a section of the hall and a tower known as the Lion Tower. On the tower is a carving of the Percy family lion which gives the tower its name.

An imaginative plan of the Warkworth Castle and its surrounding area 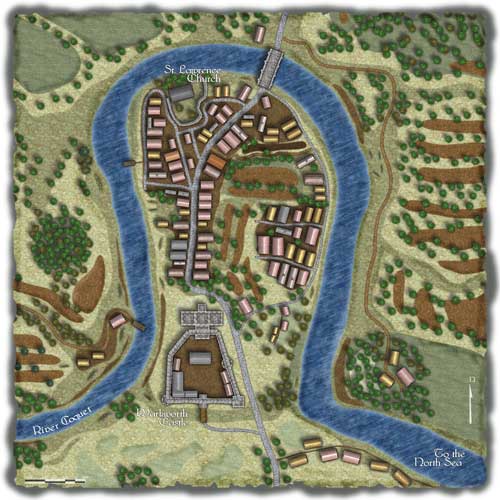 Both Prudhoe Castle and Warkworth Castle were granted by King Edward IV to his brother George Duke of Clarence.

The Earl of Warwick was put in charge of capturing the castles from the Lancastrian garrisons. Edward had to stay at Durham to recover from a bout of the measles. The castles were not attacked but cut off from supplies to starve the soldiers out. Just before the new year the Lancastrian soldiers surrendered and the Yorkists took control of Bamburgh and Dunstanburgh Castles. Warwick used the castle at Warkworth as his base while he monitored the seiges at the other castles. The seige of Alnwick Castle continued into January.

James I travels to Scotland

On his journey to Scotland King James I visited Warkworth Castle. He found it in a state of disrepair and there were sheep and goats living within the rooms.

Anything of value was taken from Warkworth Castle by John Clarke. This included building materials that Clarke used to construct his own manor, Clarke was the estate's auditor and was given the materials by the late Earl's widow.