illiam Wareham became Archbishop of Canterbury in 1503. He later performed the marriage ceremony for Henry VIII and Catherine of Aragon.

William Wareham was elected to the post of Archbishop of Canterbury by Pope Julius II.

Joan, the daughter of Henry II, King of England, travelled to Sicily to marry William II the King of Sicily.

Joan becomes the Queen of Sicily

In the city of Palermo, on the island of Sicily, Joan, the daughter of King Henry II married William II, the king of Sicily.

on of Richard II, Duke of Normandy.

William (of Warenne, Earl of Surrey)

t the time of the Conquest, William of Warenne accompanied William the Conqueror across from Normandy, fighting at the Battle of Hastings. William of Warenne was rewarded with huge amounts of land and helped his Lord, William the Conqueror put down revolts. He was responsible for putting up many castles in the quest to dominate the areas under his control. After the Conqueror's death, William supported William Rufus' claim to the throne and as a reward was granted the title of Earl of Surrey. He died in 1088 leaving a massive dynasty that would be powerful for several centuries.

ulfstan became Bishop of London in 996 and in 1002 became the Archbishop of York. Until 1016 he held the see of Worcester as well as that of York. Wulfstan was an important writer of his time and worked both on religious works and works of law for King Canute. 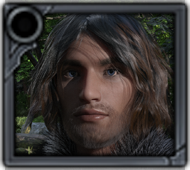