ewkesbury Abbey is situated on the river Avon on a site which may have been occupied by a Benedictine monastery in 715. In 1087 the Manor of Tewkesbury was handed by William Rufus to his cousin Robert FitzHamon. FitzHamon, along with Abbot Giraldus, founded the present Abbey in 1092. The Abbey's dimensions are almost identical with those of the original Westminster Abbey. In 1107 when FitHamon died at Falaise in Normandy his son-in-law Robert Fitzroy became Earl of Gloucester and continued the building work. On October 23rd 1123 Tewkesbury Abbey was consecrated. The Abbey was built mainly from stone imported from Caen. The church is a very good example of Norman architecture. The nave, transepts and tower are all Norman. The piers in the nave are very large cylinders typical of the Norman period. The eastern part of the building is in the Decorated sytle and had a star vault. At the far end there is an apse and radiating chapels.

The ground/floor plan of Tewkesbury Abbey 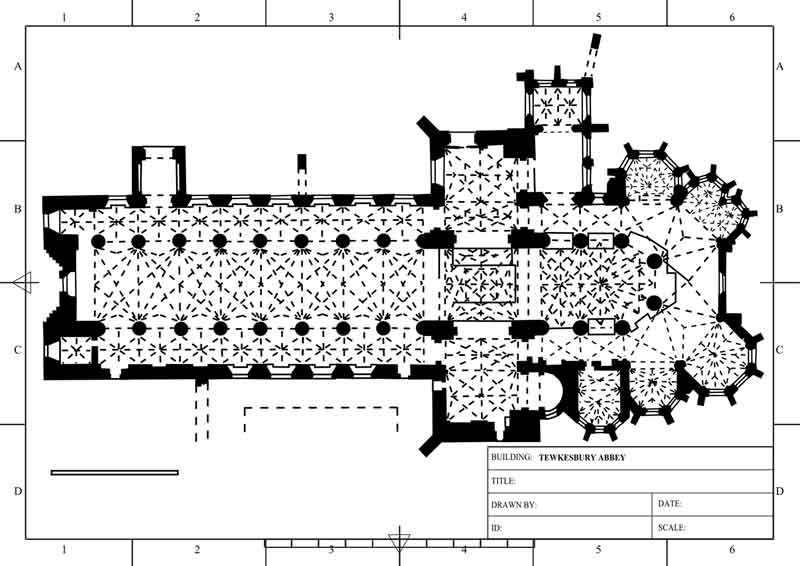 William Rufus gave the Manor of Tewkesbury to his cousin, Robert FitzHamon. Together with the patronage of the Priory of Tewkesbury.

Robert FitzHamon, the cousin of William Rufus, together with Abbot Giraldus, founded the present Abbey at Tewkesbury.

Robert FitzHamon died of his injuries at Falaise in Normandy. His son-in-law Robert Fitzroy succeeded to the Manor of Tewkesbury and continued the building the Abbey at Tewkesbury.

Five bishops took part in the consecration of Tewkesbury Abbey.

The Battle of Tewkesbury

The Yorkists led by King Edward IV and his brother Richard Duke of Gloucester met the Lancastrians at Tewkesbury. Richard was able to outflank the Lancastrians led by Edmund Beaufort, the self-proclaimed Duke of Somerset. Once Somerset's men had been dealt with, Richard attacked the rear of the Lancastrian line which broke apart and fled. Many of the Lancastrian leaders were caught and killed including Edward the Prince of Wales. Margaret of Anjou, the wife of King Henry VI, was also captured.