udlow Castle is situated in the Marches of Wales. Ludlow is one of the most important castles of the area and was the main stronghold of the Earls of March. The early history of the castle is not clear but according to 'The English Castles' by D'Auvergne, the first castle was completed by the Norman Joce de Dinham (Dinan) in around 1121. This may have only been a wooden construction. At this time a feud developed with the de Lacy family and the castle fell into their hands. The de Lacy family improved the castle's defences using stone quarried from ground that the castle stands upon.

The town of Ludlow lies within a curve of the River Teme and this provides a natural defensive border around the town's southern and western sides. The river goes around a rocky hill and it is on the top of this hill that the castle is located. In medieval times the town itself was surrounded by a stone wall which formed part of the castle's outer battlements. To the south and east of the castle there was no natural defence and so a ditch was cut into the rock between the outer walls and the town. The ditch has now been filled in and cannot be seen. There would have been a bridge crossing the outer ditch but again nothing can be seen.

The inner bailey is surrounded by walls and access to it is through a strong tower-gatehouse keep called the Great Tower. This keep has been modified greatly over the years with sections of it being removed and other sections added to. Several large buildings are arranged along the north side of the inner bailey. Originally built in the Norman period they were improved in the Edwardian period and beyond.

Within the inner bailey is a small round chapel built by the Normans and resembling the temple church in London. The chapel was said to be dedicated to St Mary Magdalene. Not much remains except the west door and the circular nave with a mural arcade that was once filled with panels. The door is an example of enriched Norman work and has chevron mouldings on the outer arch. The arcade within the nave consists of seven arches each side of the door. The arches are round and are either plain or have chevrons. The chancel section of the church has now gone but excavations have shown that it was square and had an semi-octagonal apse at the end. At some later point the chancel and apse were removed and a building added that joined the eastern side of the inner bailey curtain wall. A second floor was inserted into the round chapel and a doorway cut on the northern side so that this second floor could be reached directly from the living quarters via a wooden bridge.

This rough plan of the town of Ludlow shows the position of the castle to the north west and the River Teme that provides a natural defensive barrier to the south and west. 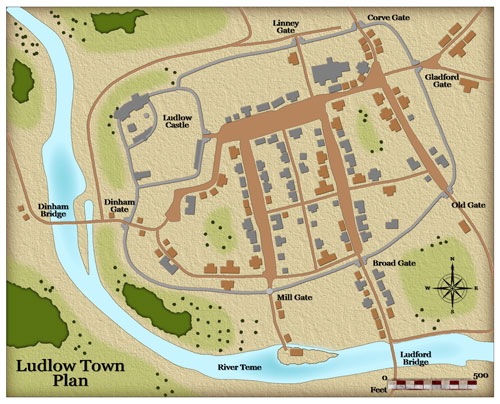 An imaginative plan of the inner bailey area of Ludlow Castle. 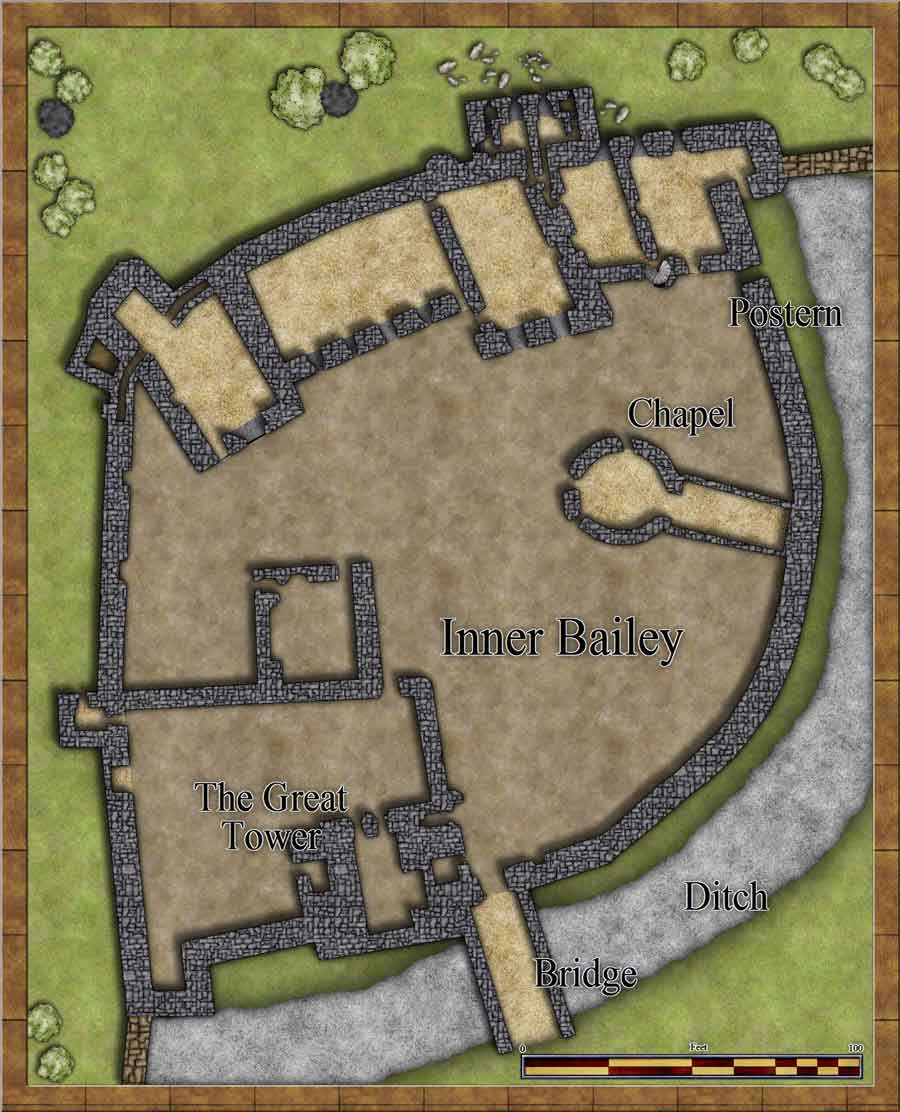 This plan shows the possible shape of the chapel found at Ludlow Castle. Internal objects are for illustration only and are not meant to be an true representation of the layout of the chapel. 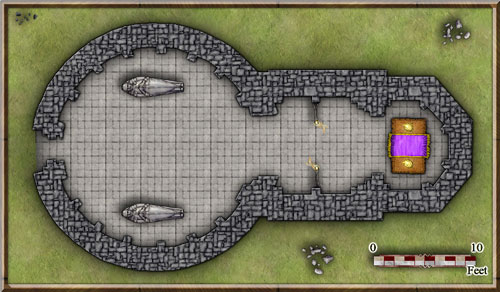 Led by Richard Earl of Salisbury the Yorkists in the north mobilised an army and headed south to meet the Duke of York at Ludlow. Salisbury was intercepted by a Lancastrian army led by Lord Audley at Blore Heath in Shropshire. The Lancastrians were the first to attack. Their first and second cavalry charges were repulsed and when the Lancastrian foot soldiers were also repulsed they turned and fled. In the battle Audley was killed and although two of Salisbury's sons were captured they were quickly released. The Yorkists had won this battle.

The Earl of Warwick with a force from Calais reached Ludlow and the combined army of the Yorkists attacked the King's army at Ludford Bridge near Ludlow. The men from Calais refused to fight their king and a weak Yorkist army was defeated. Richard Duke of York and his younger son escaped and fled to Ireland while Salisbury, Warwick and Edward of March (later Edward IV) fled to Calais.

The 4th of May had been set as the coronation date for Edward V, the new king. The Woodvilles wanted Edward crowned as soon as possible and they wanted The Duke of Gloucester's role as Protector changed so that he didn't command so much power. The Woodvilles were concerned that with the death of Edward IV who had been their protector, old rivalries would resurface and their grip on power may fail. The King was at Ludlow and the Woodvilles escorted him to London via Northampton where it was agreed that they should meet Richard, the Duke of Gloucester. When Richard reached Northampton, he discovered that the Woodvilles had already left and were at Stony Stratford.