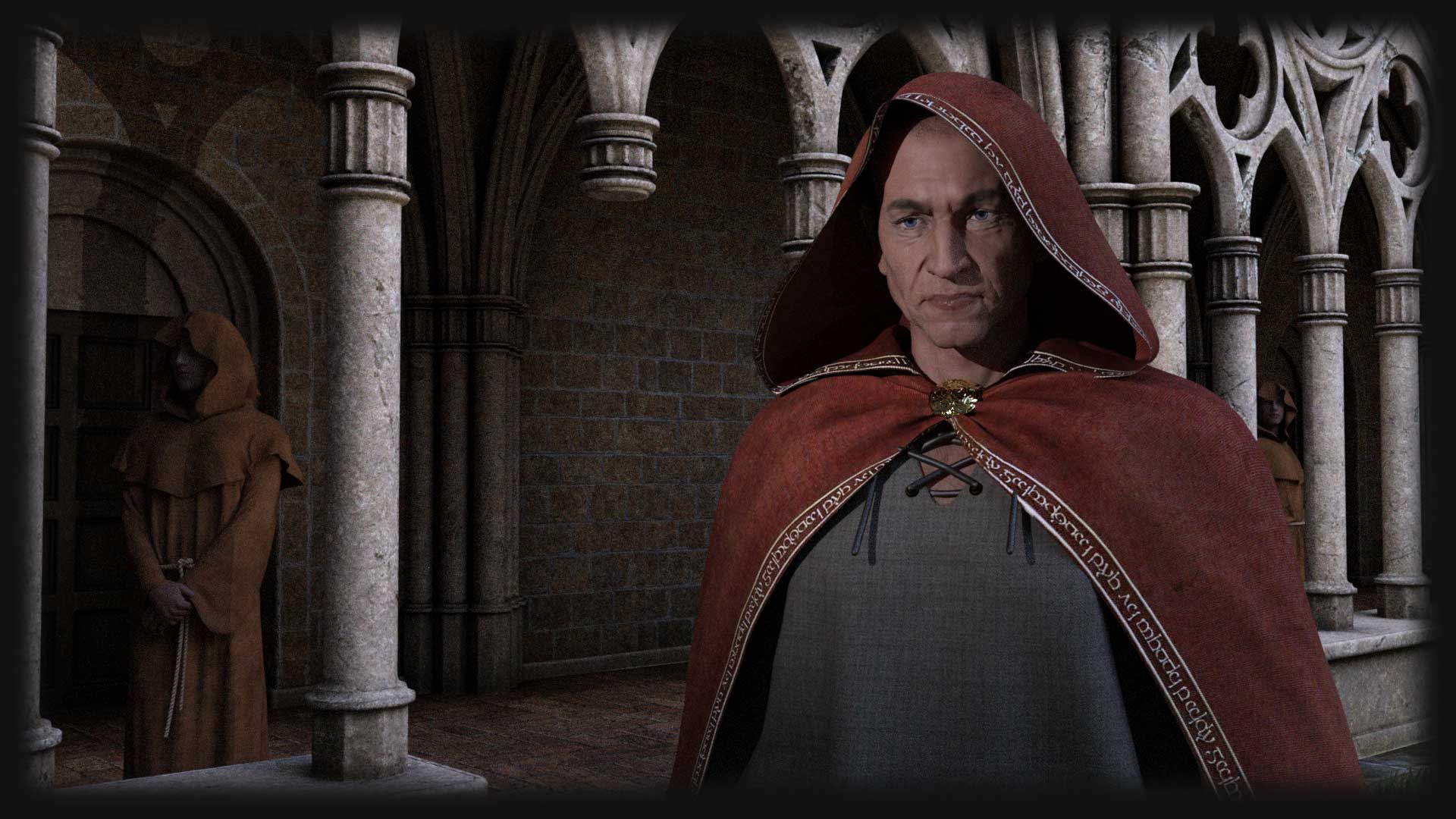 ecket was born in 1118 in London to Norman Parents. His father was a knight who became a businessman of some importance in the city. Becket worked as a clerk for a relative for some years and then joined the household of Theobald, Archbishop of Canterbury. This entailed more learning and grooming for positions of bishops, archbishops, cardinals and even popes. In 1154, when the Chancellorship of England became vacant, Theobald recommended Becket for the post.

Henry II became a good friend of Becket but the friendship did not last. In 1161 at the time of Theobald's death Becket realised the job of Archbishop of Canterbury was much more serious than that of Chancellor and that he would have to protect the Church from plans that Henry II had for it. The reason was that Henry wanted to bring order to the judicial system as at the time the Church had its own courts. The Church did not want to be part of a system which in the past had put them on the same level as serfs.

Henry forced Becket to become Archbishop thinking Becket would help move his plans forward but in October 1163 Henry put forward his plans before the Council of Westminster and Becket opposed them. Henry Attempted to move his plans forward at the Council of Clarendon but again Becket refused to comply. Henry then decided to crush Becket and at a meeting at Northampton in October 1164 planned to accuse Becket of being a traitor and to imprison him.

Becket fled the country and went into exile under the protection of Pope Alexander III who himself was in exile in Sans due to conflicts caused by the Papal election. Becket's land was confiscated by Henry II. In June of 1170 Henry II used Becket's enemy the Archbishop of York to assist in the coronation of his son Henry, the Young King.

After the coronation of the Young King Henry II left England and met Becket to discuss the conflict between them. After a series of meetings the two men came to an agreement and Henry agreed to allow Becket to return to England and reclaim his lands. On December 1st 1170 Becket returned to England and on Christmas day gave a sermon at Canterbury Cathedral. During the sermon he excommunicated several men. At the time Henry II was in Normandy and at the news that Becket was excommunicating bishops who he thought had opposed him the King became extremely angry. Four knights overhearing Henry's pleas to rid himself of Becket took the King at his word and travelled to England to deal with Becket. On December 29th the knights found Becket in Canterbury Cathedral and were unable to get the Archbishop to reverse the excommunications he had served. The knights drew their swords and tried to remove Becket from the church but in the struggle that ensued the Archbishop was hit on the head with a sword and was killed. Thomas Becket was buried inside Canterbury Cathedral and his shrine became an important place for visiting pilgrims. Henry II accepted the part he played the Becket's death and took the punishment of whipping by the monks of Canterbury.

The Palace at Westminster had been badly damaged by Stephen's supporters at the time of the Anarchy and it had become unfit as a Royal residence. Thomas Becket was given the task of repairing the buildings and by the summer of the same year Eleanor was able to move in.

Thomas Becket was consecrated as Archbishop of Canterbury on June 3rd. He accepted the pallium sent by the Pope on August 10th. A pallium is a piece of clothe sent by the Pope and is woven from white lamb's wool. It is draped around the neck.

Henry returned from Normandy to England coming ashore at Southampton where he was met by Thomas Becket.

The council held at the Royal Palace of Woodstock near Oxford was the scene for a clash between Henry II and Thomas Becket over the control of payments to Sheriffs. Becket opposed the plan and was going to oppose more of Henry's reforms in the near future.

Henry II puts plans of reform to Council of Westminster

Henry II put his plans before the Council of Westminster to reform the judicial system allowing the courts power over members of the Church which had the luxury of their own courts. Thomas Becket stood against the plans starting a rift between him and Henry that would led to Becket's death.

The body of Edward the Confessor was moved to a more fitting location within the Abbey. The ceremony was attended by Henry II and Thomas Becket.

Richard de Hastings, Master of the Knight Templars, attempted to reconcile the differences between King Henry II and Thomas Becket.

The Constitutions of Clarendon were series of statements laid down by Henry II regarding the relationship between the church and the state. One statement was the cause for the rift between Henry and Thomas Becket, that said that a member of the church who committed a crime should be available to be tried in a state court and not just a church one. Clarendon is near Salisbury.

Thomas Becket consecrated the abbey at Reading on its completion in this year.

At the Council of Northampton the Welsh rebellion and the Constitution of Clarendon were discussed. The Council tried Thomas Becket and found him guilty of perjury for failure to appear at Council and heresy. Becket was sentenced to forfeiture of his possessions. The sentence was quashed by Pope Alexander III and Becket fled to Lincoln on the 14th and then France in early November.

Becket fled to France and sought the protection of Pope Alexander III, who himself was in exile.

Henry II of England, Louis VII of France and Thomas Becket met at Montmirail to hold peace talks. Becket submitted to Henry excepting only on one point, and the negotiations failed. A second meeting took place at St. Leger-en-Yvelines, and a papal ultimatum was served on Henry.

Becket and Henry at Freteval

Henry II and Thomas Becket met near Freteval in France where they came to an agreement to end their differences. This resulted in Becket's partial restoration.

King Henry II sent word to England saying that the conflict with Thomas Becket was at an end and his lands should be restored. Hearing this Becket returned to England landing on the south coast at Sandwich.

On Christmas Day Thomas Becket took to the pulpit at Canterbury Cathedral and gave his sermon. At the end of the sermon he excommunicated several of his enemies who had taken part in his earlier troubles with the King.

When Henry II heard that Thomas Becket had returned to England and was threatening to excommunicate his opponents, his outrage was such that four knights overhearing the King travelled to England and killed Becket inside Canterbury Cathedral.

Henry II told of the murder of Becket

King Henry II was told of the murder of Thomas Becket.

The Compromise of Avranches. Even though Henry II was cleared of involvement in Thomas Becket's murder, he did penance before the Cathedral at Avranches in Normandy. The compromise was a deal struck between Henry and the church over the matter of Becket's death.

Becket was canonized by Pope Alexander III. His shrine at Canterbury Cathedral became extremely wealthy due to the number of pilgrims visiting it and donating money.

Henry II accepted his part, even though indirect, in the killing of Thomas Becket. He was whipped by the monks of Canterbury as punishment.

Stephen Langton returned to England and resumed the role of Archbishop of Canterbury. He performed a ceremony in Canterbury in which relics from St. Thomas Becket were put in a tomb. The 7th of July became St. Thomas of Canterbury's Day; a major holy day.

Henry VIII ordered the destruction of the shrine of Thomas Becket at Canterbury Cathedral and the removal of all the offerings that had been made over the centuries. The bones were supposed to have been burned but may have been reburied sparking a mystery over the location of the remains today.