Background
Background
Please note that the TimeRef website is currently being redesigned.

Background to the Crusades

hristians have worshipped in Jerusalem, the Holy City, for thousands of years. Even when the Romans captured the city the Church was able to survive. Eventually the Western Roman Empire recognised Christianity as its official religion and pilgrims from all over the Roman Empire visited the Holy City. A war broke out between the Romans and the Persians and in 614 the Persians captured Jerusalem. Thousands of Christians were massacred when the city fell and the True Cross, believed to be the cross that Jesus was crucified on, was taken. In 630 Heraclius, the Emperor of Byzantine, attacked the Persians and defeated them. Jerusalem was restored and the True cross was returned.

Islam and the Caliphates

In around 620 Mohammed started preaching the religion of Islam amongst the Arabs. The religion quickly spread and after his death a Caliph was appointed as the religious ruler of the Muslems. In 638 Caliph Omar captured Jerusalem. Those people that the Muslems captured were given the option of converting to Islam or be put to death. An exception was made for those who worshiped One God, Christians, Jews and Zoroastrians (founded by Prophet Zoroaster in ancient Iran). Those who did not convert were not allowed to ride horses or carry weapons and they had to pay an annual fee, called jizya, for being allowed to worship other religions.

The third Caliph, Uthman, was murdered in 656 and a power struggle began between the Caliph Ali (the husband of Mohammed's daughter Fatima) and Muawiyah (who became a Muslim after Mecca was captured by Mohammed). Caliph Ali was murdered in 661 and Muawiyah assumed the title of Caliph starting the Umayadd Caliphate. The Shiite Muslims supported Caliph Ali believing that he should have been the first Caliph after Mohammed and reject the first three, while the Muslim Sunnis supported the first three Caliphs. This disagreement has led to conflict between the different supporters ever since.

Pilgrimages to the Holy Land

Christian pilgrims were welcomed to the Holy Land and to Jerusalem by the Muslems because they spent their money on local food and services. Their safety was not guaranteed but a pilgrimage was not supposed to be an easy thing to do. Many people must have died during their pilgrimage due to illness, fatigue and extreme weather. The Church encouraged people to go to the Holy Land for several reasons: -

In around 1050 a group of nomadic Turks from Asia Minor invaded the Holy Land. They spread across the area and in 1071 they met an army from Byzantine and Greece intent on stopping their progress. The Turks won the battle of Manzikert and the leadership of the Byzantine Empire was reduced to chaos and civil war. The main cities of the area held out for a while but finally fell to the Turks.

Pilgrimages to the Holy Land now became extremely dangerous. Bands of robbers roamed the routes that before had been relatively safe to travel and Christian churches were being attacked. In 1081 Alexius Comnenus became Emperor of Byzantine and set about riding himself of the Turks. He sent word to Pope Urban II and asked for help from the West.

The Council of Clermont

At the Council of Clermont in November of 1095 Pope Urban II stood up and preached for a Crusade to retake the Holy Land from the Turks. He called for all Christians in the West to 'take the cross' and take up arms to protect the pilgrims that were being attacked on their way to Jerusalem. The Pope saw other reasons for calling for a Crusade. After the Norman Invasion in 1066 land was taken from the English nobles. A crusade would provide them with the opportunity to build up their lost fortunes. Europe was made up lots of separate states with many rulers. These rulers saw wars as a sport and were constantly fighting each other. The Pope hoped many would would fight in the Holy Land rather then cause problems at home.

It took time for an army to get prepared for the Crusade. Kings and barons could not simply leave their land without ensuring it would be safe from attack while they were away. Knights needed organising along with means of transport and supplies. It all took several months.

Approximate locations of the Crusader States 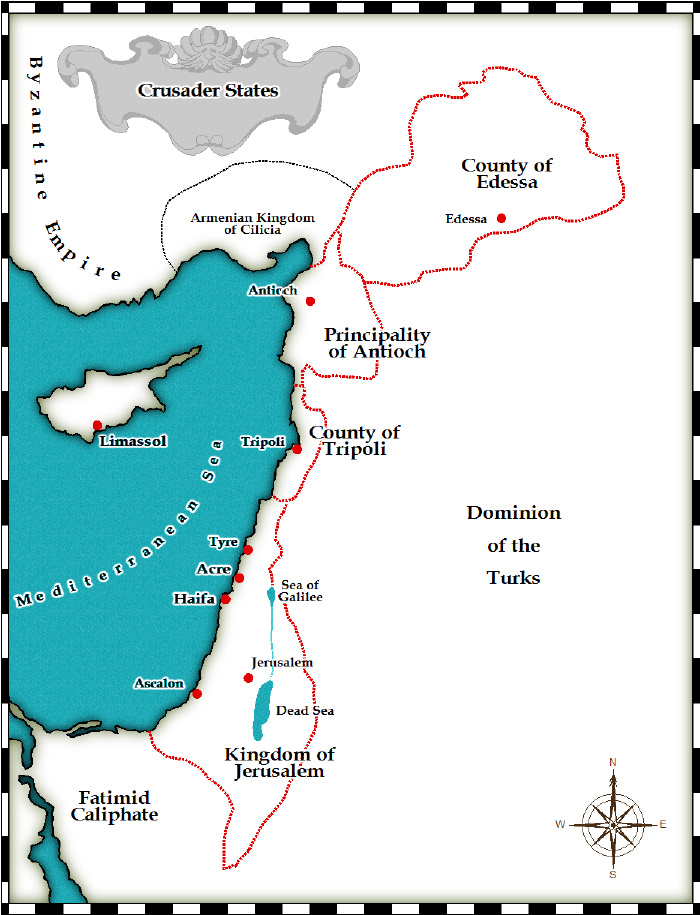 The Knights of the Holy Land

Several Orders of Knights were founded in the Holy Land at the end of the eleventh centry. Amongst these, the Knights Hospitaller and the Knights Templar are the most famous. Their foundations were a response to events that were occurring in the Middle East and in particular the Holy Land at the time. To understand why this was it is useful to understand the background to the events that led to their creations.

Many who wanted to join the Crusades were ordinary people. Under the leadership of Peter the Hermit and Walter the Penniless a large number of ill-equiped ordinary people set off for the East. Many died from starvation on the long journey to Constantinople and when they reached the city they were badly behaved and were quickly moved on. The undisciplined army was attacked by the Turks and the People's Crusade ended in failure.

Many leaders and knights from across Europe took part in the first of the Crusades. Their aim was to capture Jerusalem from the Turks. The Crusade was very successful and resulted in the formation of the Crusader States in the East.

The fall of the Crusader State of Edessa led to the Second Crusade. A Crusade was called for in 1145 but it look a couple of years before the Crusaders set off, mainly consisting of Germans and French. Poor leadership led to the failure of this Crusade and Edessa being lost.

The fall of Jerusalem to the jihad (Holy War) of Saladin started the Third Crusade. The Kings of England, France and Germany took part. The Crusade had several successes but did not recapture Jerualem. A peace treaty, signed by the leaders and Saladin, was the final outcome.

This Crusade was called for by Pope Innocent III to capture Jerusalem. An agreement was signed with Venice to transport the huge number of Crusaders expected to take part to go via Egypt. The Venetians had their own plans and used the Crusader army to attack Zara, a port formerly owned by Venice that had rebelled and become independant. After the fall of Zara the Crusaders turned their attentions to the capture of Constantinople.

A mysterious Crusade supposed to have consisted of children from Germany and possibly France. How young the children were who took part is not known and there may not have been any children at all. The Crusaders did not get very far and many of those that took part never came back.

Again Egypt was the destination of this Crusade called for by the Pope and organised by Frederick II, the Holy Roman Emperor. Although Frederick promised to join the Crusade he failed to do so. The Cruaders mainly consisted of Knights from northern Europe. They laid siege to Damietta, a port on the Egyption coast, and captured it. The journey from Damietta to attack Cairo had to be abandoned due to floods and attacks. The Crusaders had to surrender and Damietta was handed back to the Muslims. The Crusade was over and Frederick II was blamed for its failure.

Frederick II, the Holy Roman Emperor, had not taken part in the Fifth Crusade so he set about planning the sixth to make up for its failure and to gain favour with the Pope. A marriage to Yolande, the heiress of Jerusalem led to Frederick becoming the King of Jerusalem, but again after a delay and sickness in his fleet he only reached Cyprus resulting in his excommunication by the Pope. Due to the excommunication Frederick had little support and the best he could do is arrange a treaty with the Egyption sultan Malik al-Kamil who gave Jerusalem and other lands to The Emperor. He was then crowned King of Jerusalem.

King Louis IX of France led this Crusade and its aim was retake Jerusalem from the Khwarizmain Turks who had captured it in 1244. The plan was to first attack Egypt and then use the country's resources to feed his army before attacking the Muslims holding Jerusalem. The Egyptian port of Damietta fell to the Crusaders but floods in the Nile prevented them from advancing on Cairo. Six months later the conditions allowed the Crusaders to advance but they were defeated and returned to the port. King Louis was captured in battle and a ransom was paid for his release. Damietta was returned to Muslim control.

The Crusader States had come under attack by the Mamluks and their leader sultan Baybars. Again King Louis IX of France led the Crusade. This time Louis chose Tunis on the north African coast to use as a base for further attacks. The Crusaders besieged Tunis but illness and disease spread throughout his army and Louis became ill and died. Charles of Anjou and Prince Edward of England took control of the Crusaders. The siege was abandoned and Charles of Anjou returned home. Prince Edward sailed to Acre.

Between 1271 and 1291 the Crusader States were attacked and taken over by the Muslims. In 1291 the city of Acre was the last to fall and the Crusades were over